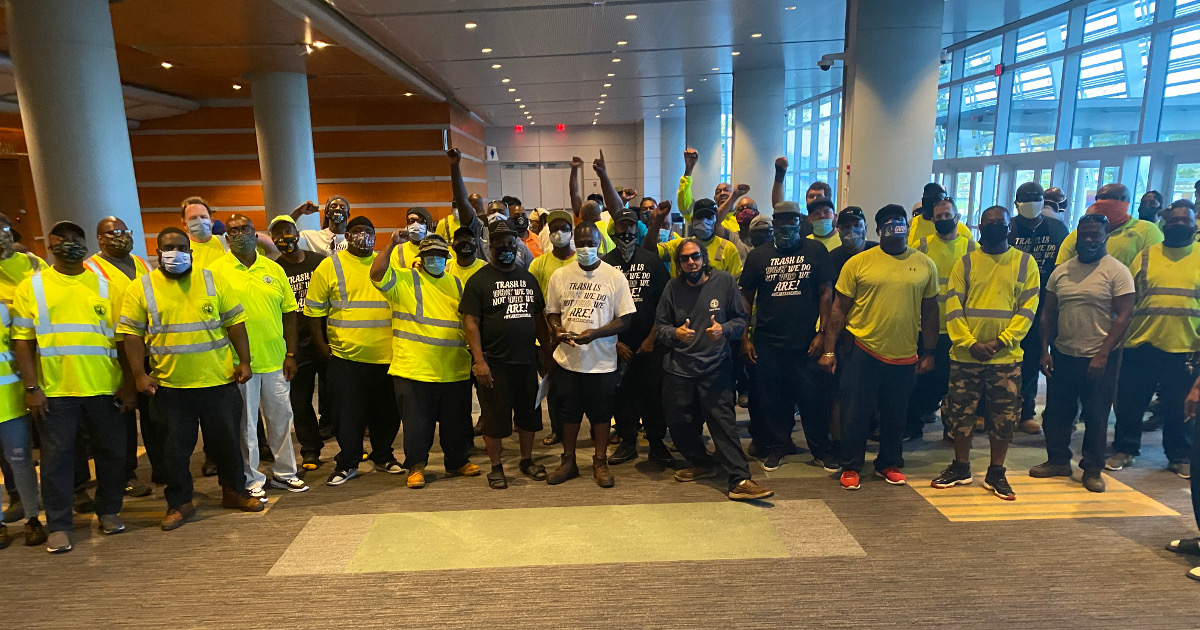 On August 19, over 100 sanitation workers in the City of Virginia Beach refused to load into their trucks, demanding hazard pay. Amidst this global COVID-19 pandemic, essential workers everywhere deserve to be paid for risking their lives to come to work.

Sanitation workers in all surrounding cities, which are smaller cities, have all received hazard pay such as $2,000 bonus given to city workers in Norfolk. Cities of Hampton and City of Portsmouth are also getting hazard pay, why did Virginia Beach get left out?

City officials claimed that the Federal CARES Act money did not allowed them to pay hazard pay, yet other cities were able to do just that.

Alfred “Red” McClenny, a sanitation worker leader told the news that “city council recently voted to give first responders hazardous pay, and we were designated as first responders over a month ago during the time where they were trying to get employees to come back to work. And now that it is time for them to pay us – we’re not listed among the first responders.”

Workers then mobilized in big numbers to attend the city council meeting on Tuesday, August 25. Over 100 workers, from Waste Management, Highways, Public Works, Public Utilities, Parks and Rec and more, packed the council meeting to demand that the city include all city workers in the $1,500 bonus for “emergency responders.”

Worker leader, Red, spoke in front of the council stating, “We just wanted a seat at the table. We are grossly underfunded, which leads to a shortage of men and equipment. In other words, we simply do not have enough to do what we need to do our jobs. Yet, we continue to function with professionalism. We love what we do.”

Red continued, “the issue here is not just about hazard pay. It hurt us, in a sense, because we are so committed to what we do, but we were overlooked. Our jobs, even outside of COVID is hazardous.”

Virginia Public Service Workers Union, UE Local 160 union representative Dante Strobino also spoke out at the council meeting, calling it a matter of racial justice that a 98% African American department is overlooked, yet Police and Fire are given hazard pay. Strobino later challenged Mayor Bobby Dyer, Republican, to ride on the back of a sanitation truck for one day, to get a feel for what it is like.  City of Raleigh Mayor Charles Meeker did this after the successful sanitation workers strike in 2006.

During that council meeting it was mentioned that there are “left-over” funds from the budget that they were able to use to include Waste Management and other departments in the $1,500 bonus.  This is money that should have already been in their salaries.  City council had recently approved a 2.5% salary merit increase, while at same time a 2% increase in healthcare premium costs to workers. Yet, they clearly have millions of dollars lying around!  Not to mention the $20.3 Million lying around in their reserve fund!

This small, but important victory shows that when workers organize and take collective action, we can win changes.  We must keep the pressure up! If workers come together to build their own organization, a union, we will have the strength to continue these changes over the long-haul. Let’s build a union!